Another shoot'em up?! First I would like to make a praise to Irem. The had many ideas for very original games with nice graphics and music, and always great playability. The are like Konami, except that Irem always had much smaller release numbers and so their games are usually harder to find.

Maybe Irem games made their games for adults more than other gaming companies did, becaues in general Irem games have a low amount of stuff that only kids could tolerate, such as cheap deaths, lack of continues, painful music and terrible controls. 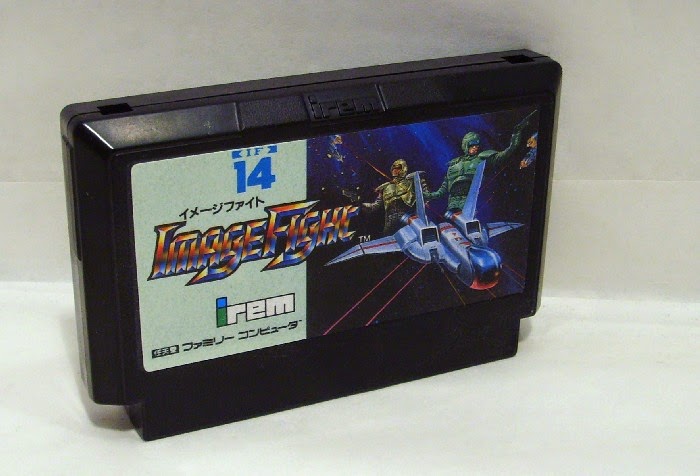 I also think Irem famicom carts are the best looking because of their screenshot on the back. 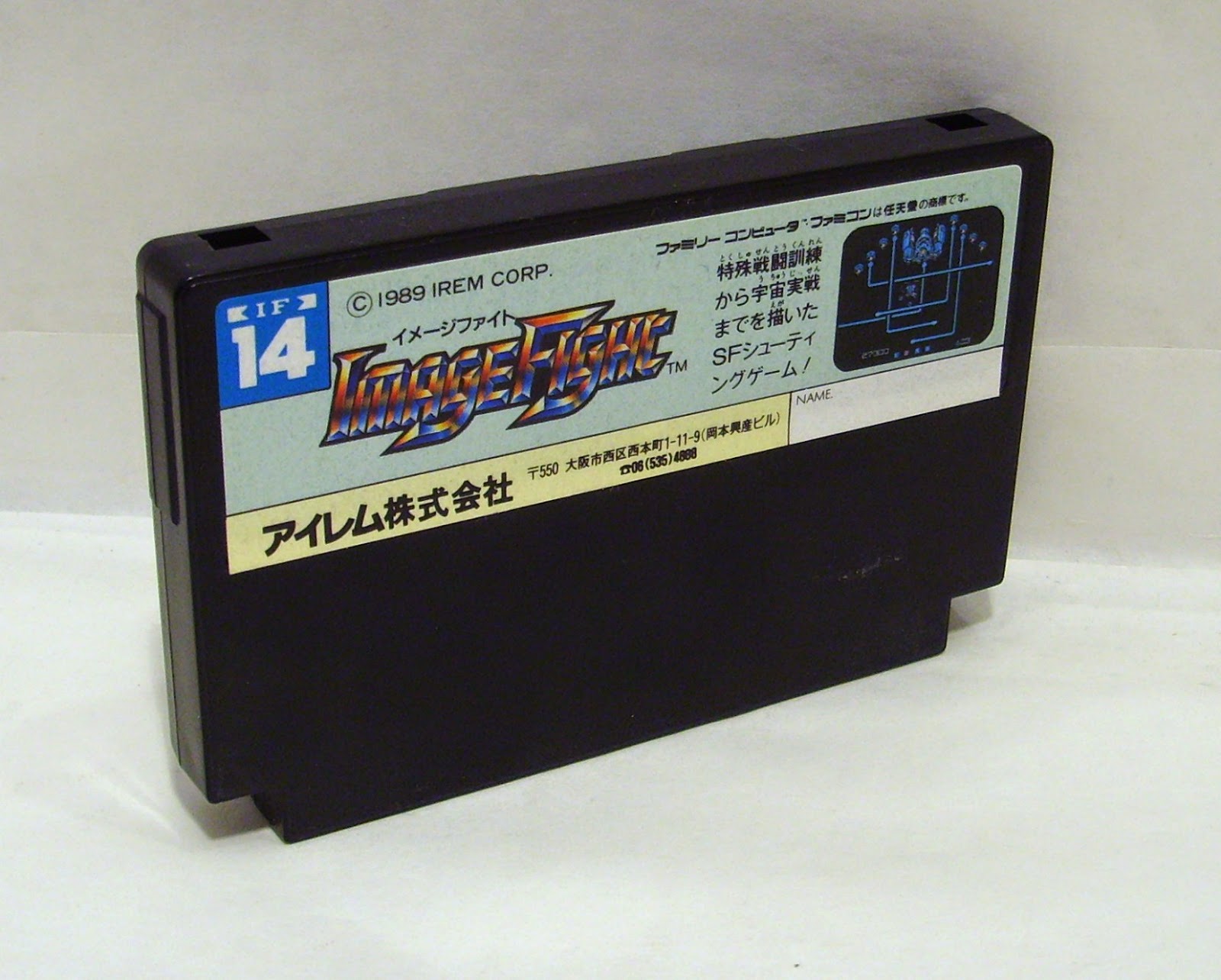 Image Fight has no passwords or save function and needs to be completed in one go (unless you use a cheat). At first it seemed annoying because of the easy deaths, but then I found that the charm is in the infinite continues. In practice you has infinite lives because even after game over you get to restart at the same checkpoint.

The famicom version has a nice black background like flying in space. From looking at youtube videos, the NES version replaced it with a blue background, which to me seems weird.

There may be other changes between the two version but I have not found them documented.

_
The number at the bottom of the screen indicates plane speed. Change with the A button.

You need to accomplish on average 90% on the first five levels. I have tried looking around the net, but no guide informs what this number refers to or how to get 90%. The guides also say that you have to replay the stages if you get less, but on the famicom version I played you'll be taken to a penalty area (at 5:27 in video). This difficult area is where I took up my turbo-controller, at last, because without it my thumb went numb. The game doesn't otherwise require a turbo controller.

The game isn't always easy, but isn't too hard until the final boss. If you die on the boss there, you'll restart at a check point without powerups that makes it almost impossible. It would probably be easier to replay the entire game. Quite a shame that it went so easy with a good powerup, and so impossible without it. There is a stage selection cheat one can use, maybe I'll try that the next time to replay just the last stage.

You can usually find it cheap. 5-7$ loose, and 15$ boxed, or so. It isn't anything special but it also isn't too bad except that it is annoying how impossible it got in the ending... It has some fun powerups, nice graphics and sound and because you have inifinite lives you'll keep on playing.

The game is also on Pc Engine and is usually considered better than the famicom/NES version. A problem with the famicom/NES version is that it feels like it could need more polish. First you have five "training stage", but they still have real bosses and all. Then three "real battles", that are very easy with the right power ups, but if you die at the final boss the game almost becomes unwinnable.

Here is another review that I thought was most accurate. Maybe because it also reviewed the famicom game, unlike other reviews.

Here is another review. Don't just read the first half of it!
* http://www.honestgamers.com/7780/nes/image-fight/review.html


I wrote about Parodius on GB a while ago, back when I mainly reviwed GB games almost two years ago. (The Japanese game is called Parodius Da!!, the European simply Parodius) 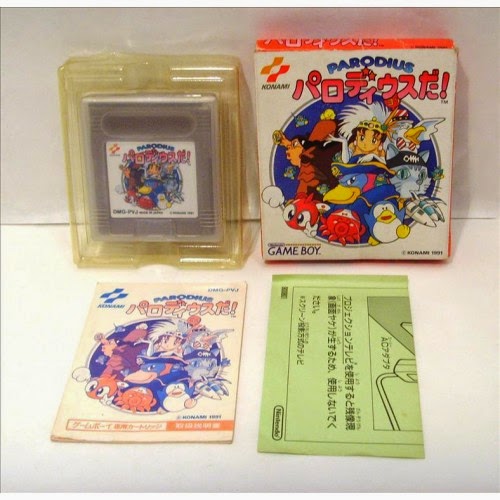 My privilege with a blog is that I can review games how many times I want. Yesterday I took another look at Parodius and recorded a short video too.

Now I can compare it to Parodius on NES/Famicom, a game that is troubled by bad slowdowns. The GB game surprisingly has no slowdowns. Compared to later SFC, Saturn or PS1 games, the GB version is short and has less things going on at the same time. I suppose there is some flickering, although not in a way that makes it harder to play. You can check out the video for yourself.

_
I show some different setups here. It may be interesting to check around 11:20 when things start happening.

Although I still think it is a good game, I now think it lacks depth and while it is fun, it may be too lightweight to be truly memorable. Last time I enjoyed it being simple but I think now I would rate more challenging Konami games like Gradius or Twinbee higher. Or a game like Section Z for Famicom.

Parodius is humorous, a simple joyful playthrough, without demanding too much strategy or thinking. It has infinite continues so you can keep on playing and it is a great shooter for first time shmup-ers (as I basically was back then). I do recommend anyone to pick it up and give it a try. As far as shmup games go on Game Boy, it is one of the best. Grade 5/5.
Upplagd av Unknown kl. 09:34 Inga kommentarer:

During the weekend, I played several hours of Othello World. 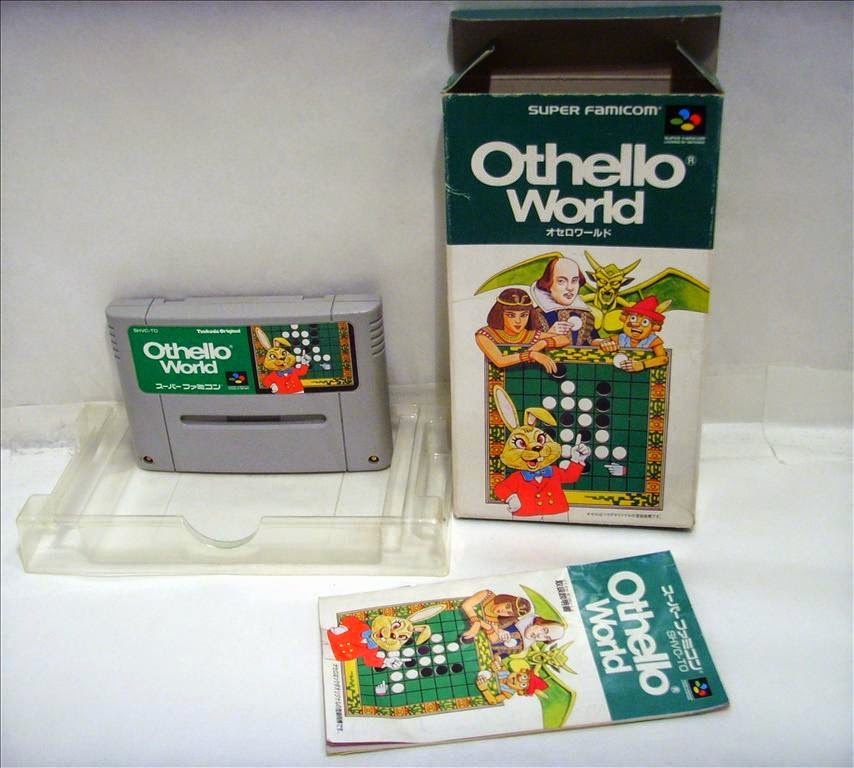 For this blog post, I will call the game Othello. In the US, the game is known as Reversi. Othello is a trademark name that was developed in Japan in 1971 based on the English game Reversi, developed around 1880. For more information, see http://en.wikipedia.org/wiki/Reversi.

I enjoy to play Othello against computers and I can usually beat the simpler ones, but not this one. As one reviewer on gamefaqs said, this is a hard Othello game.

There are five world. Eventually I did beat Sky World after I found a strategy I could use, but after Sky World there is the Sky Caslte world that is REALLY hard. I may have had a won game at some time, but in the endgame you have to be a master of calculation and that is very hard against the perfectly calculating computer.

In order to beat Sky World, I had to put some time into actually studying Othello. I read this strategy guide: http://www.samsoft.org.uk/reversi/strategy.htm
and "Othello lesson" on youtube (lesson 2 here: https://www.youtube.com/watch?v=at0g9zibQZY

These strategies didn't work well against the computer, however, so I played  different against it. I played the opposite of what the guides suggested, but I think I did alright. One needs to realize that I am not an expert player and can't remember long lines of opening play or do long lines of precise calculation.

It was an anti-computer strategy. My plan was to take possession of three of the four sides, and give one of the sides to the computer. Most importantly, I take the side to the opposite of his side. Then I would allow him to give me disks and try not to get outside of the inner 16 squares.

Since I have all sides but one, I will have the last move on any row or column and slowly he will run out of good moves. It is useful here to have a few waiting moves. Because I have given him one of the sides, once he runs out of good moves, he will have to move on that side to give me the corner, and a theoretically won game (just needs some hard calculations).

There videos might be boring for the average person, but I think that someone who is really interested in Othello or Othello World might find them interesting.

Here is how i defeated the fairy


And here is grim reaper. He was harder than the fairy.

On Sky Zone, you are allowed to get three hints. Just press start, and the computer will tell you how to move. This is useful for the endgame. Unfortunately you con't have this on the Sky Castle and I didn't have much chance without my hints.

There doesn't seem to be any password online for this game so here are passwords for Sky World and to Sky Castle. To enter the password, select Continue from the start screen, then you enter your name in 4 letters (press Select to change to Latin letters), and after that you will be able to enter the password. The password screen allows many letters, but only enter the ones you need. 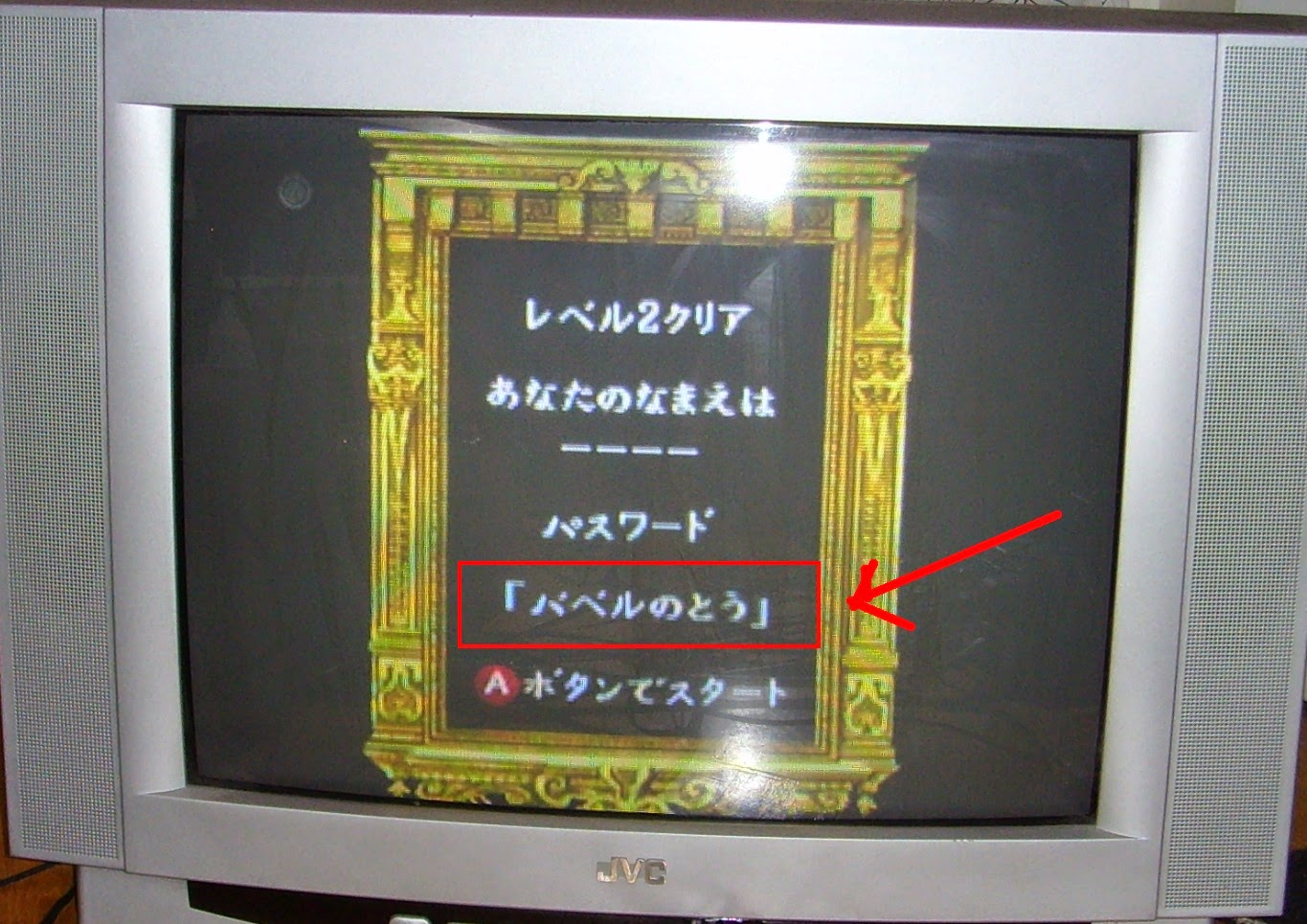 And here for Sky Castle. 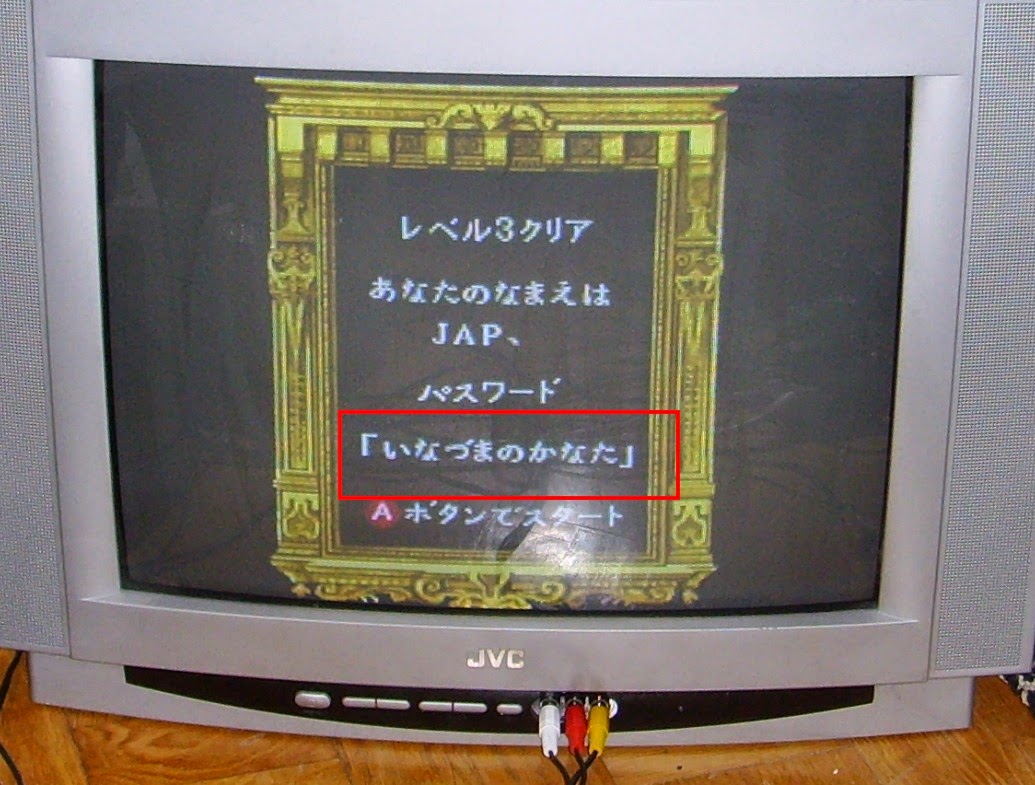 There isn't much else to say. It is Othello, and it is hard.