We made a nice reproduction of the famicom game Gimmick. 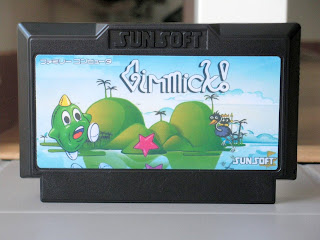 It is based on the American NTSC version (unreleased), because we can't emulate the special famicom chip easily... The label is custom made and found at famicomworld (thank you). I think it looks nicer than the original Gimmick label, but also we don't want people to sell reproductions as original games on eBay.
For this repro we took 495 SEK (75$) at the time, but the next time we get a doner-cart, we can offer it for 395 SEK (59$). Both prices are including 25% VAT. Unfortunately, There are only a few rare carts that can be used as donor cart for the Gimmick repro, so we can't do many. 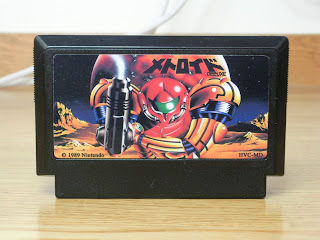 My colleague just made this Metroid Deluxe repro too. I think Metroid Deluxe is called a 'hack' game. this repro will cost 395 SEK (59$) incl. VAT. The label design is a mix between a Nintendo Power Poster and the FDS logo which we have edited in Photoshop.
Upplagd av Unknown kl. 13:41 2 kommentarer: 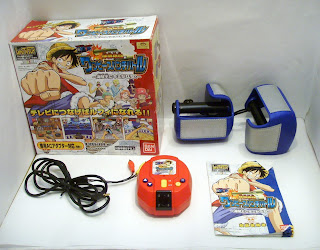 I connected this thing and recorded video... There is only one cable to connect actually, the TV cable. The console is one batteries, and the boxing is picked up by a remote sensor in the console.

The first battle went without trouble. The second was just to fence around with your arms. The third one was more difficult, and I think the device didn't record my moves very good... Maybe I didn't stand in the right position.

But in any case, I got some exercise. It seems you have unlimited continues on each stage, so with practice it should be possible to play it through. I think there are a lot of stages, and I don't have that much patience...


I was happily surprised by Dungeon Explorer. It felt like the game Diablo that I played a lot back in the late 90's. Dungeon Explorer is from 1989, and I think it is impressive how many enemies at the same time on the screen. The SNES might not have been capable of this without slowdowns or flickering.

I think there a lot of action/RPGs well worth checking out. Neutopia is also a nice game. Personally, I don't like the more adventure-like games, such as Legend of Zelda and Neutopia where you walk a lot back and forth a lot. Walking is the main element in those games, in my opinion. A game such as Dungeon Explorer is more straight forward action and is more enjoyable for me. Also this doesn't require Japanese knowledge as far as I can tell from my short playing.
Upplagd av Unknown kl. 12:56 Inga kommentarer:


I played this shoot'em up game. I really like Twinbee as I have mentioned earlier, but I never gave played much of Moero. Mainly because it starts off in a horisontal scrolling and juggling the bells is very difficult.

Turns out that the game is very difficult. I played until stage 6, which is the second the last stage. I later learnt that you shouldn't worry about the bells and instead focus on the stationary powerups that are more powerful. I died many times juggling the bells, and at around Stage 3 I gave up trying to do that...

I recorded some 45 minutes of video (three clips) where I try and try again.
__

This game is also known as Stinger on the NES.
I think it might be easier with two player coop. The Japanese version is one of few games that even has a three player coop mode.


Not a bad game. But I think it is too difficult for me to enjoy it fully.
Upplagd av Unknown kl. 00:00 Inga kommentarer:

I finally made a video.

Gameplay on second highest difficult. No edits, cuts or pauses.
There is a part 2 of the video also with the last matches.

__
I started with a 3 button controller but later changed to the normal 2 button. The 2 button controller works better than you might think. Changing between kick and punch takes a little of course (change with the select button, or set it to start) but when I played against Honda I started to do it somewhat succesfully. For me it didn't detract much from the gameplay actually. I have a played a lot of this game on SNES and the pc engine version is not far behind it even with the crippled controller. It may be slightly easier too, although it is hard to say, but the opponents seem a little stupider in this pc engine version.

In any case, I have fun with this game. You probably only need two buttons to play it.

Ultraman Ball for Game Boy, and other videos


I've uploaded a lot more gameplay videos to youtube, and now have 29 videos in total.

Ultraman Ball is an uncommon game boy game that was only released in Japan. I think it is fun, some original ideas. Although both Chalvo '55 on the Game Boy and Armadillo on famicom have the same idea of the platforming game where you can transform to a ball. Yet Ultraman Ball is more platform and less puzzle and gameplay is faster than the games I mentioned.

I rate it 4/5 for originality, good gameplay and nice music.  Nice Super Game Boy support too. I don't know if it gets harder later on in the game, but I hope so. I don't have to say much more I think, now that I record my own videos.
Upplagd av Unknown kl. 13:20 Inga kommentarer:


I enjoy game boy games and there are several bomberman games that are available. One of them is Bomberman Red for GBC, that I played to the end.

One nice thing with bomberman games is that they aren't that hard to beat. One of perhaps bad things is that they are repetitive. But you could say that it is nice with a game where you don't have to think too much. Just play and keep on playing.

The basic bomberman gameplay takes a couple of hours until it feels natural. In the first hours you will die many times from your own bombs, but after a while you'll improve and after that you'll be able to master any bomberman.

The first bomberman was released in 1983 for a couple of early computer systems in Japan such as MSX. The famicom version was relased in 1985, and it was also released on the NES in the US in 1989. It was not relased in Europe. But it was relased as a game boy game which was mostly the same, except with a smaller screen and a password function.

I played a bit of it yesterday with Super Game Boy.

I chose green as background to match with the original bomberman...
As you can see, my way of playing is to play safe. Avoid the risk of blowing yourself up.

I think there are 100 levels. After a while I got tired of playing it though.

More information about the game on the video page.

The game boy game is very cheap (2-3$). The famicom game that looks almost the same is around 6-7$. The games are completely in English.

Later there were many many bomberman games. The Super famicom (SNES) games are fun as party games, since you can be up to 5 players with a multitap. It is reported that Super Bomberman 4 is the most fun of them.

The Sega Saturn has a bomberman that allows up to 16 players at the same time. Some consider it the ultimate 2D bomberman game.

I'll rate the Game Boy game 4/5. There is also the "Bomber Boy" mode that is more complex, with power upgrades you select before each course. Personally I prefer a simpler game style so I didn't play that but I weigh it into the grading.
Upplagd av Unknown kl. 16:51 1 kommentar: 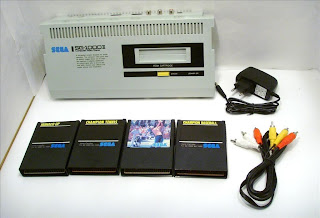 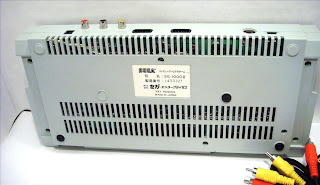 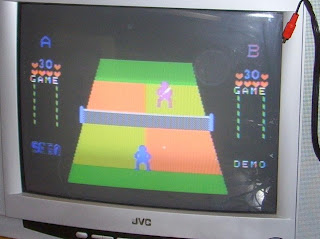 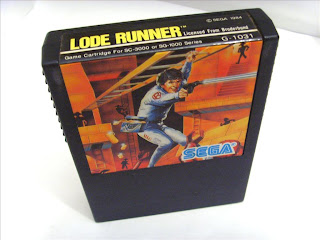 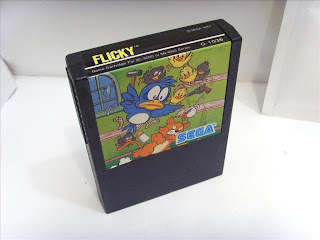 Flicky is fun, and Lode Runner is playable.
I made videos of these two games.

So, do check out my youtube channel for videos, since I won't be writing about all games here.

Holy Diver is a fun game, except that it is super hard. I show gameplay from the second half of level 2, to halfway through level 3. This is still in the easy part of the game. Later on it becomes almost impossible, even if it has infinite continues.

The sound in this video is also one speaker, sorry about that. In the future I won't make that mistake again.

It is only part 2 because part 1 was less fun, and quite long. I only uploaded part 2.
Holy Diver was only relased on famicom in Japan, but it is completely in English. It is one of the more expensive games, since it is relatively uncommon. Price is around 30$.

Doraemon and Astro Boy for famicom

Yesterday I watched AVGN and he was angry about all the crappy licensed games in America (Arnold games and Spielberg games).
I think that in Japan they had a lot better licensed games.
I recorded myself playing Doraemon and Astro Boy (Tetsuwan Atom) on famicom. I made a mistake with the sound, only recording on one channel. But anyways I think the gameplay is clear.

In Doraemon, you can continue by pressing Left+Start at game over screen. This is probably necessary. I think I missed powerups because my Doraemon is just getting killed over and over again.
As you might suspect from my seemingly random shooting, I am trying to find the hidden exits. That's the trickiness of the game. I definitely think it is an amusing game.


In Tetsuwan Atom I had some trouble too, trying to figure out how to fly.I think you have to take a lot of coins and after that jump three times forward. This game was made by Konami, it is a fun game too. I got some kind of powerup at the end of the video, I am not sure what it does and I didn't have more time...


I think that these games have more depth than one might suspect. Several other Japanese action games are actually deeper once you get into them. It is not just running and punching. Some people find these games confusing or "crappy", but actually they are very good games if you learn the ideas.
Both these games are full of secrets.
They were only released in Japan, but can be found relatively cheap. I just sold Atom Boy for 39 SEK = 6$ and Doraemon for 25 SEK = 3$.
Upplagd av Unknown kl. 22:56 Inga kommentarer: