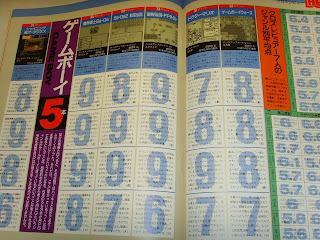 For once my picture is in high enough resolution so you can click on it and zoom in to see the release dates among other things.

I may need to explain how ratings work in Famitsu: There are four people who each give their score of the game from 1 to 10. These numbers are then summed to give the total. As you can see from the cross review, reviewer number 4 doesn't like game boy that much.

No Tetris? No Super Mario Land...?

Note that reviewers at Famitsu don't spend a lot of time on each game because they have to review a lot of games each week. They are also a bit populistic towards well known series. And Japanese people do like their RPGs.

SaGa was the first game boy RPG. Released by Square at the end of 1989 it was the 18th game on the console in Japan. This likely influenced the ratings, as it was given at the time of the release. SaGa quickly became very popular in Japan. I haven't played it myself though, as I don't really enjoy RPGs that much.

I also want to add that the quality of game boy games continued to improve after 1993. Link's Awakening was released later in 1993, for one, and it got a top score.
Upplagd av FredJ kl. 14:40 Inga kommentarer:

I feel like an idiot (again) because I bought a bunch of Mega Drive games that I thought looked cool, without checking what they were. It turns out that they are pretty bad.

With some other games that aren't worth anyting, such as Street Fighter II and Eternal Champions... Calculating the loss now...
Upplagd av FredJ kl. 18:15 2 kommentarer:


The famicom disk system (FDS) is a surprisingly unexplored territory. I noticed this when I discussed it with people from famicomworld once. The only FDS games that people are interested in are the ones they already know. The short list consists of Metroid, Zelda 1 & 2, Kid Icarus, Super Mario 1 & 2, and a few others.

In my quest to spread Japanese video game culture to Swedish people (who buy their games from eBay anyways) I would like to improve the situation somewhat, so that maybe they will buy a disk system from me some day. Or why not this Twin Famicom?

Here is a video a friend made of the interesting Nintendo-developed Nazo no Murasamejou that is by some considered to be a predecessor to the Legend of Zelda. The release dates and time it took to develop the games make me think that is unlikely. But anyways, it was released before Zelda and had an overhead perspective.


(Nazo no Murasamejou)
As a triva note, the first game with overhead perspective on the Famicom was, I believe, Ikki. Maybe that was a Zelda predecessor too?

Here is another game in overhead perspective that was only released on famicom disk: Kiki Kaikai. It is the precessor of Pocky & Rocky for the SNES:

Then we have Konami's Arumana No Kiseki, again only available as famicom disk:
(not my video)

And then there's game that are hard to even find screenshots of... A few days ago I bought Radical Bomber!! Jirai-Kun. It is some kind of action game I think, but no one on the Internet seems to know how to play it.

And these are just some of the games to show that there is to offer in the uncharted territory. I can mention more games some other time.

Solitaire, or Lazlop's Leap, is a puzzle game that I have spent many hours with and I figured I should do a little write-up. It's a good game for those who like to torture themselves with solving puzzles and mind games and such. There are 100 puzzles and a battery save so you can save how many you solved and your score. I just solved number 71. I skipped one earlier so I've solved 70 of them. LOL, I don't think anyone will take up the challenge of solving more and compare scores.

There is a score for each puzzle. With every new marble you move, you get one point added to the score for that puzzle. If you make two jumps in a row with a marble, you still only get one point. That's how you try to get as low score as possible.

I think I've seen this game or something similar back when I was a kid, but I don't really remember... Here is a video that shows the gameplay.

I did not create the video..

Did we play co-op this weekend?

I was over at my colleague and I got to play PS3 for the first time. In fact, I haven't played playstation for at least 10 years. Tennis is always fun.

My colleague doesn't like shmups at all, I actually don't know what he likes... I had intended to visit another friend to play some retro games Sunday, but it turned out to be too long with train. A bit depressing as I had looked forward to it. Last time we met we played Twinbee, and I must say I enjoy that as a two player game. We started with twinbee on the famicom, which may actually be more difficult two player because you keep bumping into each other.
Then we went on to twinbee on the Saturn and I don't quite know what happens in those more modern shmups. It seems to me that the old shmups were more about strategy, but modern ones are interesting too, in their own way.

This is Twinbee for Famicom. You need to take the bells when they have the right color. Blue is speed-up for example.

In the old shmups you really need to get the right powerups and not lose them, but modern shmups is just about raw fire power. I wonder if they were able to improve the genre much in the last 10 years. There were a couple of top quality shmups for the Saturn and the Dreamcast such as Ikaruga and Radiant Silvergun.


Ikaruga on dreamcast. They couldn't have that many items on the screen in 8 and 16-bit consoles, so it became a natural limitation.


Here is Twinbee on the Saturn. When you play two-player you'll keep on taking each others bells too... I often don't know what happened (or who was playing as who), but who cares as long as it's fun, right?

The problem with shmups is that enthusiasts kept on wanted them to be more challenging, but the more challenging they got, the fewer people could enjoy them...
The original twinbee sold 1.2 million copies in Japan which makes it the second most sold shmup ever in Japan, after Xevious.
Ikaruga was only released in 50 000 copies.

Another list today. Preliminary, it may change as I see more systems...

Judging by shape and standard color, not limited edition and colors schemes..
Only including classic consoles that are or were commonly known. So no Virtual Boy or other consoles that were niche.
No further explanation needed, I think... List of best looking consoles are:
Nintendo made very practical consoles, but they are not beautiful and did not make the list...

unrated:
neo geo AES, 3DO, PC-FX and others that I have not seen enough of to evaluate.
Upplagd av FredJ kl. 11:27 Inga kommentarer:

I saw a list somewhere that ranked consoles, and I thought I'd make my own for classic consoles..
They are impartially listed by how much impact they have had. It may however be biased for the Japanese market, and maybe for the time around 1990-1998 when I was most into video games...

There you go! I like to stay positive so won't bother with long text with pros and cons.
I have intended to make a list based on appearence. Hopefully won't take long.