A SunSoft game that is not very common, but still pretty cheap to get because it's not very popular. 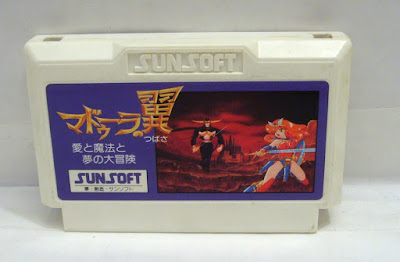 One of the reasons why it might be overlooked is that it's classified as an action-rpg game, but I would say it is 95% action. The only RPG element is that you pick up weapons and upgrades. Use them by pressing Start and then Select to change weapon.

You progress through the stages and enter rooms where you can find these items. One of the rooms has a miniboss that you have to defeat in order to get through the exit. It is hard but not unfair. You continue by pressing Select+Start at the start screen. I won't call it a cheat because the game is unplayable without this. Maybe it is even mentioned in the manual (I don't have the manual though).


The game is entirely in English. Apart from the Select+Start trick, there isn't anything else that needs to be known. The last stage can also be a little tricky from what I read on Strategywiki, because you collect the Wing of Madoola item that allows you to fly by pressing down+jump.

When you continue you get to keep all the items you picked up, so you never have to visit a room twice for items. Still it is very difficult because of the myriad of enemies that appear. I really enjoy these kind of "enemy bombardment". :) See my previous reviews of games such as Ninja Crusaders and Demon Sword.

I read at Wikipedia (http://en.wikipedia.org/wiki/The_Wing_of_Madoola) that the game has 16 stages. I was stuck on stage 12 for over an hour (see some of my game play in the video below) and then I accidentally pressed Start without pressing Select and lost the chance to continue. Arino on Game Center CX did this mistake too on stage 12... But I understand him. Stage 12 is the most difficult stage, according to Strategywiki... After getting beaten so many times you start to go cross eyed.

The Game Center CX video recommends to go back to stage 10 where there is a spring to recover health, then play through stage 10 and 11 without taking too much damage, in order to get to stage 12 with more health...

While the game has this continue function, it doesn't have any password or save function, so it needs to be beaten in one sitting. As long as you remember to press Select+Start you can keep on replaying older stages too to get items on them you missed and then jump forward again.

I recommend exploring all areas to make sure you don't miss any items. Some stages are a bit like mazes and have a Metroid feeling to them but they are actually not that big. If you don't feel patient, you can of course look at the maps on the strategywiki article.

It is still a fun challenge and I hope to go back to it some day when I have more time. Arino on Game Center CX beat it, eventhough he had to replay from the start twice. He had of course full help of his staff that told him what to do and even replayed old stages for him, but the game is clearly beatable while providing a nice challenge.

We have this game for sale at our webshop: http://japanspelshop.se/index.php?route=product/product&product_id=2550


Last Friday I sat to play some King's Knight.
This game looks like an RPG but it's not. Its purpose is to be a shooter in RPG style. It has some novelty value, but that is probably the only advantage. 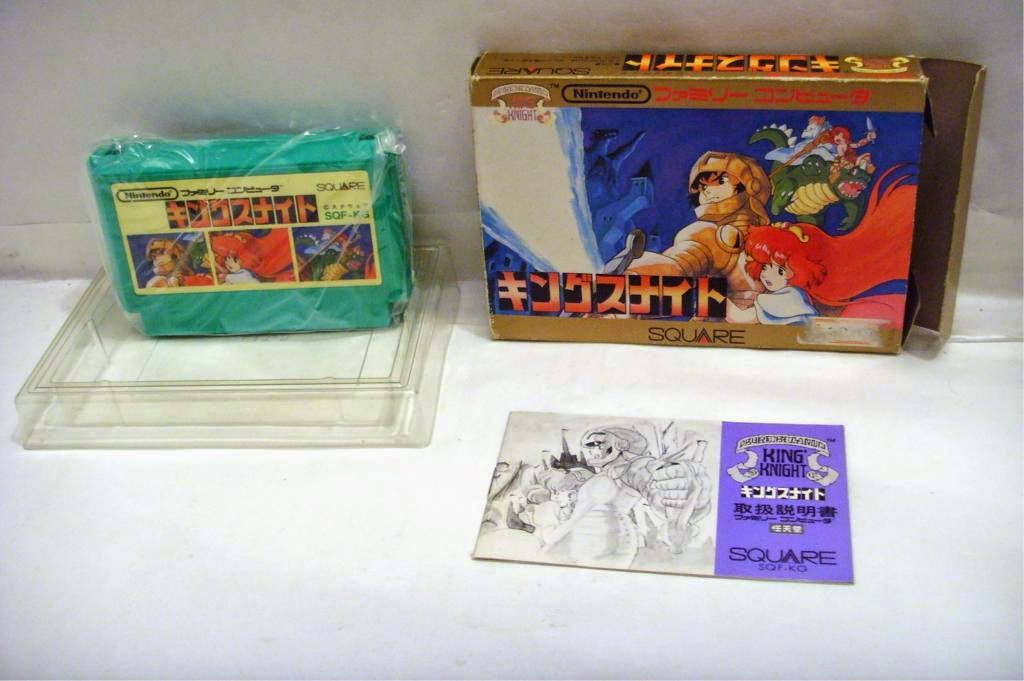 To play this game, there are a couple of things you need to know.
If you don't have a  manual, here they are:
1. At the start screen, you can continue by pressing the Select button. See my video below. Choose character to replay and press A then start, or simply press Start to play stage 5 with your existing characters.
2. You need to find all four special items for all characters so you can make it through stage 5.
3. On stage 5, having all four items on the characters, makes it possible to use their special attack once by pressing B. This must be used at the right moment.

To make it through the first stages, you are almost forced to know where the upgrades are. Without the attack upgrade, the shots are only half as effective for example, and you will die soon. You can see my video below how hard it was to kill the ghosts before I got the attack-upgrade at 0:55.

The good thing is that the upgrades are always in the same position so you can memorize them. This would take a very long time with normal play, and I think that the game is more fun if you follow a stage map. You can see the stage map for the wizard if you visit http://www.gamefaqs.com/nes/587386-kings-knight/faqs ) so you can follow my path in the video, if you want.

As you can see in the video, I didn't use the map yet, and missed item 1. Actually didn't have all four items with any character and I didn't have any chance on stage 5.

The game doesn't have any save function, but it is pretty short if you know how to play through the stages and know where the items are. If you don't mind playing with a map and maybe a walkthrough, I think you might want to give it a try. The Japanese version is entirely in English. It was also released for NES in the US.
Upplagd av Unknown kl. 07:18 Inga kommentarer: