I bought some more game boy games today. Here are half of them 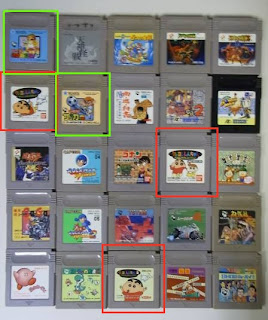 I have put red rectangled around the crayon shin chan games. The second from the top I do not have: Crayon Shin Chan Collection. It is probably contains games 1-4.  Pretty nice. I haven't seen it before, I assume it is a bit rare.

The green rectangles are around the Kunio-Kun games. I have mentioned the football (soccer) game before. The blue one I think I will review some other day. There are a couple more Kunio-Kun games for the game boy, and they are all worth trying out. They are a bit difficult due to Japanese text, but it's not too hard to figure out.

I've tried to get people to appreciate the crayon shin chan games but it has not worked. The games were probably made for children but I don't mind. I have completed 1-3. Number 4 is said to be the best but I haven't gotten around to it yet. It seems to be more advanced than the others. Having played all the others I think I have had my share for a while. But I'll get to it some day.

Crayon Shin Chan 1-2 are pretty simplistic platforming games. The music is cheerful. There is some strategy involved in how you collect the smilies or cans (I don't remember... :-/ ). In game 1 I think you get extra lives, but in game 2 they give you the ability to blow bubbles. I write reviews to remember the games, and I didn't review them at the time and have forgotten now.

Game 2 was published by the unknown company "Banalex" and not Bandai (notice the oval logo on game 2). Maybe they were a sub-company of Bandai created due to some Nintendo restriction. It does break the sorting of the boxed games, because all Bandai games have a number on the box and you want the numbered boxes next to eachother, but you also want the crayon shin chan games next to eachother. Well, I found a solution, so don't worry!

Crayon Shin Chan 3 is a bit different than games 1,2 and 3. In game 3, you bicycle around and try to complete different short tasks or maybe competitions. I think it is an alright game, as long as your happy with playing very simple mini-games.

I'll borrow a video of game 1. As you can see there is a mini-game in it too, but I think those mini-games only give you extra lives so they aren't necessary to complete.

Game Boy games today and After Burst for Game Boy

I have a little problem - I like to buy game boy games. Here is what I bought today. Not very expensive, but they don't really pay off. 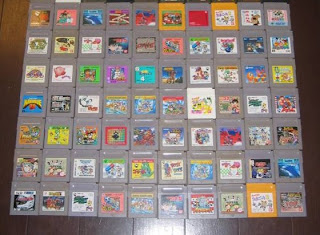 I actually have almost all these games already, but I didn't have Konami Collection 4 that is in the middle next to Metroid II.

Next to Kid Dracula is an interesting game called After Burst. I think it was an original game for the game boy, only in Japan. It is a bit like those 80's artillery games were you hold down the button to determine how powerful the shot will be. You would usually shoot up in the air and there was wind and stuff, then the show would fall down on the other side of the screen depending on power and the degree you aimed your cannon.

In After Burst you walk around and carry your cannon that you aim by pressing up and down. I'll borrow a picture from vizzed.com:

You shoot the egg shaped thing on each level and progress that way. Sadly, the game has terrible slow-downs. It was probably badly programmed. Other than that, it is quite interesting, I think.
Upplagd av FredJ kl. 16:16 Inga kommentarer:

Today I had the chance to buy this japanese light gun complete in box. It is from 1977 and is called TV Sports Star (TVスポーツスター). 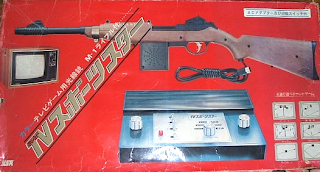 The question is its value. If these things would be rare, it could be worth something. If it had been made by Nintendo, the probable value would have been 150$-200$.

Consulting the Ultimate List of Japanese Video games at http://www.geocities.co.jp/SiliconValley-Sunnyvale/2702/list.html we see that a lot of these video games were released in the late 70's. This also happened in Europe and the US. Everyone wanted in and it doesn't seem like it was a difficult thing.

The rifle sold for 3500 yen, more than I wanted to give. That is around the value of generic early TV-games in both the US and Europe. A bit surpring maybe. There just isn't a collectors market for them, they are considered to be old toys rather than pioneering video games. Especially if they were made by unknown toy companies such as this one. The link says it was published by Takemi (タケミ) but the box says YSA. Neither gives any google hits really.

I might have been able to get 100-125$ for this one, because it's Japanese and has a really cool rifle.
Upplagd av FredJ kl. 21:04 Inga kommentarer: 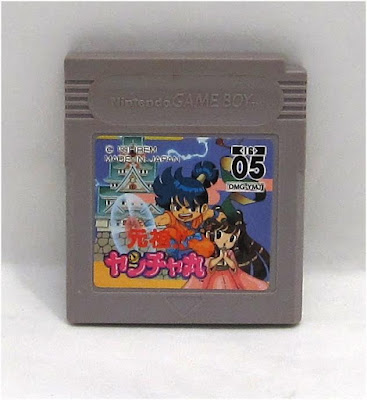 Yesterday I sat down to play this game that I recently received. It was only released in Japan, but is entirely in English. Not that common.Yanchu-Maru is also known as Kid Niki on the NES. The games don't seem to be the same though.

It starts off a bit boring and easy, same as Adventure Island. But it gets a bit better. It's a short game of only 4 worlds and 3 courses on each world. You get 5 continues, which was enough even for me to be able to beat it without much difficulty.

The game is almost a Super Mario Land rip-off. Notice the moving platform at 2:33 and how the clouds look. Also notice the bonus at the end of levels and the hidden bonus rooms where you can collect coins.

I do like it. Sure the music is repetitive, but the sprites are nice and big (unlike super mario land). And I was able to beat it! That's nice. The bosses can be tricky but once you've died a few times from their surprise attacks, they are very easy to figure out and only take a few hits.

Maybe if you beat it without using continues you get to the good ending. My ending said "Sorry Maru" or something like that.

After I reviewed 22 games yesterday, I'll take it easier today.

Snow Bros is one of the rarities for the NES and Famicom. The US Game Boy version is costly too. The Japanese is uncommon, but affordable. However, I wouldn't want to spend much money on such a terrible cover. Look at it, it's scary! I did get a loose cart a few days ago. Curious what the fuzz is about.

(video not by me)

It turns out to be an average Bubble Bobble clone. Change the bubbles to snow balls, and there you go.

The game has some lagging and the graphics is a bit choppy, but I think that is part of the charm of the earlier game boy games. When you lose your three lives you are game over, but you seem to get 10 credits so you can keep playing for a while. It's not too easy or too hard, and I can imagine that I could be playing it for a couple of hours at a time.
For it's originality and general niceness, I'll give it 4/5. Wish there were more Bubble Bobble clones.

Football games for the game boy

Several of the games from yesterday were football (soccer) games. Football games on the Game Boy are actually not that bad. It's interesting to see how they dealt with the limits of the Game Boy. It's not like Baseball games or Ice Hockey, that in my opinion are all unplayable.

Nintendo World Cup is one of the unique football games. A charming game. I've played it all the way to the end.

A problem with football games is how to continue. In some games, in particular the early games, you can only play one match and then that's it. In later games, you can play in tournaments or the J-League (Japan League, Japans first division). However, because there is Japanese text, those games can be difficult to figure out. There are menus, you may need to buy and sell players, check stats, and so on.

I think it is interesting to see the different approach that the football games have. Some games choose the "flickering" effect, including Nintendo World Cup. Some may find it annoying, but it keeps the paste and the games are definately playable. The alternative is the slow down, but this usually makes the game very difficult to control, as everything suddenly slows down.

Here are some other examples of different approaches:
Soccer Boy: Big cute characters and play up and down

In the game "Goal!" you play like this. I don't recommend that game though.

Then there is the Captain Tsubasa game, where you tell the player what to do in a menu system.

I don't see the appeal of those game, frankly, but they certainly has their supporters! If you like strategy games, sure.

According to gamefaqs there were 22 soccer game boy games. Discount tvo Captain Tsubasas and the dreadful Super Kick Off, there's 19 games to discover. At least 6 of them only released in Japan. I may do more detailed reviews at some time, although actually there isn't that much difference between the 19 games. You try to score goals.

As I enjoy obscure games, I had to try this one out as it arrived today.
Not sure if it's a game or not. There's a lot of questions you answer in Japanese.

A much cooler feature than the questions is the option menu, where you can listen to BGM (Back Ground Music) and see weird patterns. Sorry, there's no video I could find.
I suppose most people miss the option menu when they try the game. I saw it in the manual. Manuals are nice sometimes, even if they are Japanese.
Upplagd av FredJ kl. 21:18 Inga kommentarer:

I enjoy all obscure games, and this one I just got in sure is obscure.

I wonder what the Japanese voices are saying in all these games. Once they start talking the dialogue can go on for several minutes.

I didn't get the manual with the game. Sometimes when I get manuals for these 18-X games (as I call them), the pages are stuck together... Well.

This is the kind of crap boys my age had when growing up. Kids today with internet wouldn't know. We had to play these crappy games for many minutes just to see an animated lady remove her shirt.

At least the English spoken in the game is funny. "Deara Ween", "Fast Praya Ween".