We've had a little more free time recently so Fredrik could take up Famicom Friday.
There are some games that have been laying around for a while that he's been curious about.
All of the games are for sale at our shop, you can reach the items through the title links below.

First the puzzle game Ochin ni Toshi Puzzle Tonjan. A pretty uncommon game, and puzzle games can sometimes be surprisingly fun. However, the game felt very simplistic so it was probably made for kids.


Then he tried Super Chinese 2.

The first game on Famicom and the first game on Game Boy are full action games, and they seem to be completely in English. The rest of the games have some RPG elements. A fun thing with these games is that they fully support 2 player co-op mode.

But this Famicom game turned out to be pretty hard to play if you don't know Japanese... I suppose it is playable with a guide, but it would take a very long time to get into it. So Fredrik didn't play for long, since he wouldn't understand the story anyway ...

So he went on to some Namco games instead. Namco made many very enjoyable games based on their arcade games and you know you will always get some decent gameplay, even if the games may lack depth.

Dragon Ninja was more fun than expected. It is also called Bad Dudes outside of Japan. The initial feeling is that the movement is stuttering and unresponsive, but you will get used to it very quickly. It has a great "Double Dragon" feeling to it, and the fighting gives satisfaction. A charming and surprising little addition is the "I'm bad" speech when you defeat a boss. The game seems to have unlimited continues so Fredrik kept playing for several stages.

Quinty is a simplistic but perfectly playable little action game. It is also known as Mendel Palace in the US. Like with many Namco games, the Famicom games seems to be entirely in English. It also has unlimited continues. We recommend playing in 2-player mode. You won't get blown away by it, but it's always nice with co-op mode.

Lastly, he played Burger Time. He tried it before but never made it very far. So this time he decided to give it some more time.

Typical for these arcade made games is that they were made to NOT be beatable... It is a difficult game if you don't learn the enemies' movements, much like in Pac-Man. They often don't move directly towards you, but move right and left instead. After a couple of tries, he made it to stage 3. Must have been tough, though, seeing as he had nightmares about the game that night!


Yesterday I sat down to play Dragon Scroll, to see if it was playable in Japanese. 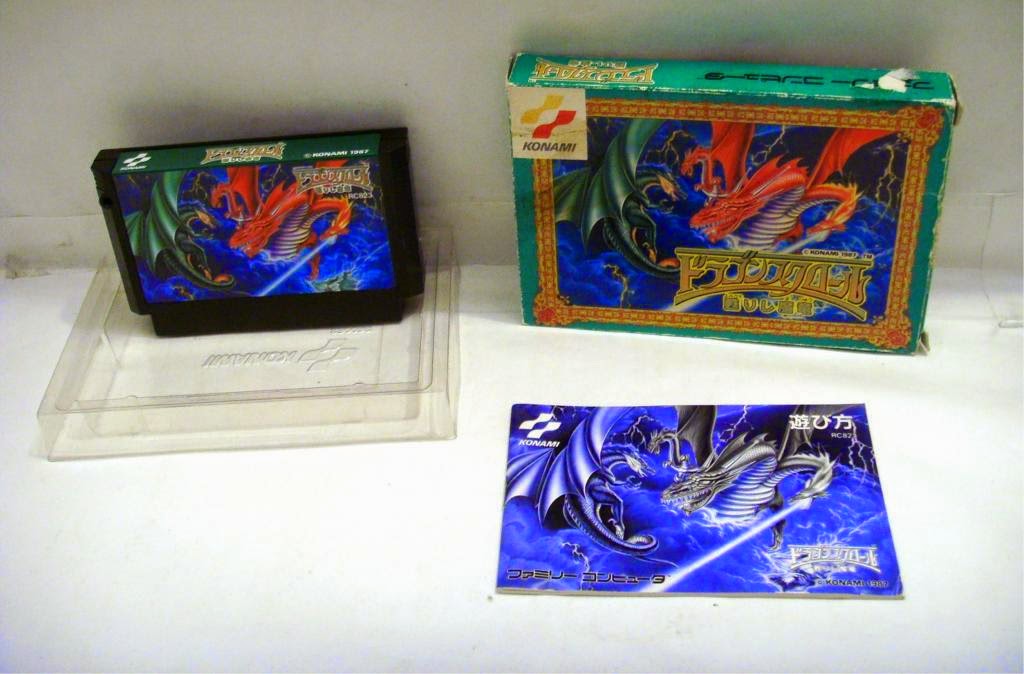 Dragon Scroll is an action/RPG game developed by Konami in 1987. It was only released in Japan.

Action/RPG can mean different thing. In best cases, all the fighting is in action, and you have a lifebar and level up. Some games are entirely in English. I have written about two perfectly playable FDS action/RPG games previously.

Dragon Scroll is very much like The Legend of Zelda. It has mostly action and there is no complicated menu system. With Select screen you see some items you can switch between, with English or little text. However, just like in Zelda, the challenge is to figure things out. To do this, you get clues from some enemies that you kill, and the clues are cryptic. According to strategywiki, the game is pretty hard even if you play the English translation (but I haven't tried). In Japanese, it will be impossible to get through it unless you follow a guide.

I played around for a couple of hours but it was hopeless. The good thing I can say is that the action sequences are definitely not unplayable. You have unlimited continues and I made it very far in experience points, to level 13 out of a maximum 15. So I don't think the game is hard if you know how to get through it. If you die, you keep all of your Exp points and can chose to get a password to continue at a later time.

I wasn't able to figure out any of the puzzles. Some of them include to stand between two statues for a couple of seconds, or to shoot certain statues a couple of times. (I read this later) You will in some cases get certain items, that you will have to use later on other items.

The game has typical well made Konami graphics and music. Nice big characters. The controls work flawless as soon as you get used to how your big character gets hit.

Konami does a Zelda clone! That's sounds really great, but the game itself turned out to be a bit of a disappointment. You spend most of the game wandering around five worlds (forest world, desert world, moutain world, etc. No ice world, thank God) and various dungeons looks for staffs, books, bells, rings and plants. Dragon Scroll is great looking, has awesome music, and the final dragon vs dragon battle is cool. But something doesn't quite click here. The magic is a little lame -- it's mostly used for finding hidden items. You never really gain any fun abilities from all the stuff you collect. The game feels structureless and lacks character; it mostly plays like a big easter egg hunt. Some of the items and areas are virtually impossible to find on your own (much like Castlevania II), so a FAQ will probably be necessary to finish this thing. -- http://chrontendo.blogspot.se/2009/09/chrontendo-episode-25-is-finally.html


Note that Chrontendo is usually a bit negative towards the games he describes.
I still have to agree with him on most points.


Anyways, the game is perfectly playable and anyone who enjoys top-down NES/Famicom action/RPGs such as Crystalis or Willow should definitely try this out as this is in the same style with the same type of big colorful graphics. It isn't extremely deep and has a very standard story, but is a nice little fantasy game set in a world of waterfalls, castles and dragons, for those who enjoy that. Try it on an emulator with English text, and if you can beat it then try it on original hardware.

On gamefaqs, Dragon Scroll has a score of 4.10, which is pretty high. Higher than Willow, and a little below Crystalis. However, there are no reviews for it yet. It was only released in Japan and is probably not that well known.