I haven't been slacking off playing lately but I have been visiting some friends who have a youtube channel with videos they upload where they play games.

It is in Swedish language. I am the guy to the left with the cap!

Here is Twinbee on Saturn. I have previously written about what a fun two-player game it is, finally I have a video:
_

Here is Guardian Heroes. I hadn't played this before, but I quickly found out what a great gameplay it has, especially in multiplayer.

Well, there is a couple of more videos we've made and more will be uploaded. If you are interested, check out their youtube channel and subscribe.

Next time I visit them I plan to bring a couple of famicom games.
Upplagd av Unknown kl. 14:07 Inga kommentarer:


I recently got one of these for the first time.

It has small rubber pads for the joystick, and these had gotten stiff and it was hard to move. 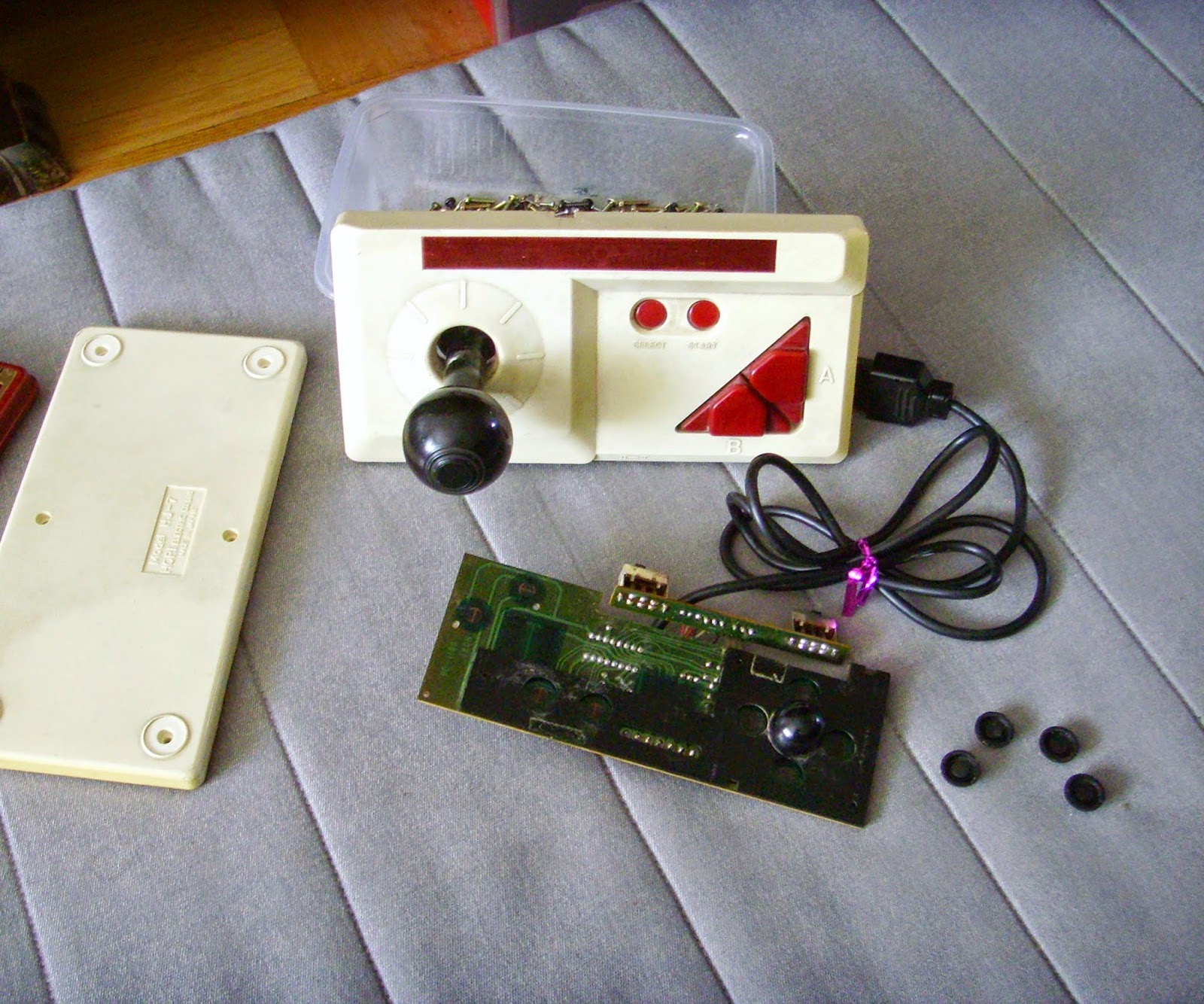 I read some some recipes on how to fix them, such as boiling them for a couple of hours and then putting them in glycerol, or boiling them in an ammonia solution. Anyways, I put them in boiling water to soften them up. I don't know if it is such a good idea to do with conductive pads, but I didn't have much choice.

While it was boiling, I thought that if I could replace the pads with identical, I wouldn't have to worry about the pads being worn out or not being conductive. They look pretty identical to the pads in a MD1 controller. So tried to replace.

After a little of testing of one of my favorite games Bomber King, it seemed to work perfectly. The MD1 has nice and soft pads that move with little restistance. However! When moving the stick left and releasing, it would bounce to the right and move slightly right... The MD1 controllers are too soft! This was annoying, at least to me. So I was thinking, would this be acceptable to a customer? After some more testing I found it to be too annoying.

So I searched for other pads that would be better.
My first replacement attempt after MD1 was to cut out pads from a Super Famicom (SNES) controller. They worked alright, but I think they are slightly too short and soft, and gave a little of the same problem as the MD1 pads. Also, they didn't always make contact. I think that because these original rubbers are second hand, one can't trust them.


I looked at some other rubber pads.

The Saturn and MD2 pads are completely different and wouldn't fit. I also stabbed myself trying to open an MD2 controller when my screwdriver broke right through the plastic. Evil SEGA design. 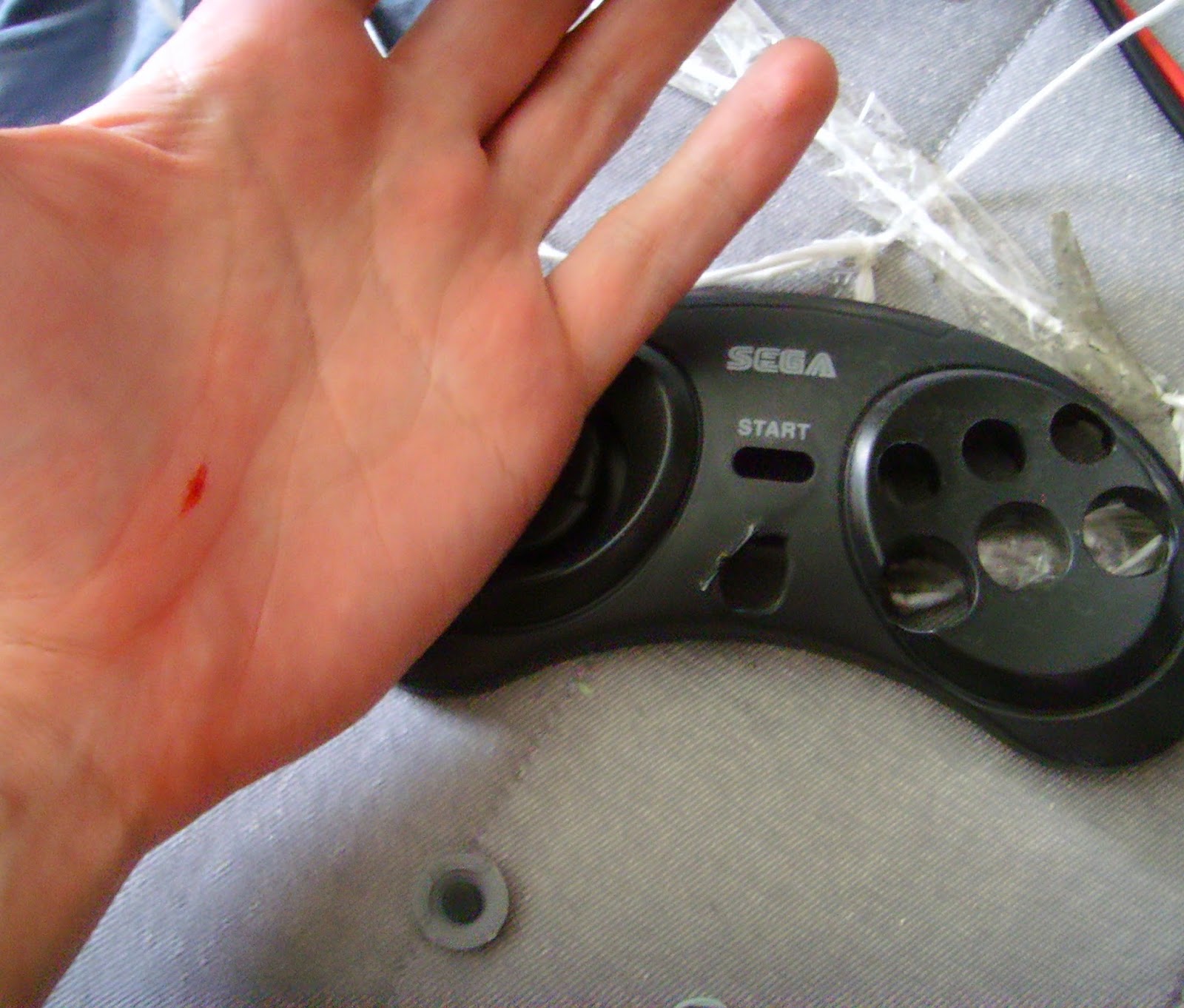 Alright, but the SNES pads were still decent so I tried these third party replacement pads. They are stiffer than the original and new, so there would not be a concern about them making uneven contact (when some side might work worse than some other side).

And now the stick seems to work great again. I won't bother boiling the original pads as these pads work great.

The best thing with sticks like these is that they make it much easier to move diagonally. They are also removable unlike original famicom controllers, and you can use an extension cord to make them longer.

Famicom sticks are hard to come by and I don't really know of anyone who owns one. On eBay these sticks are for sale at around 45$ with shipping. Due to my restoration work I'll list mine for 60$ (incl 25% VAT) plus shipping.

I don't know if this will be necessary to do with all of these sticks with time, but I suspect that the type of rubber they used is more likely to have this problem. Maybe it won't happen if it has been stored differently, or used regularly.
Upplagd av Unknown kl. 15:09 Inga kommentarer:


During the weekend I suddenly suffered a tooth inflammation that made it hard to eat, drink, swallow and gave me a lot of pain. Unable to do anyting, I sat down with a strategy game I had, Jyutei Senki.

It has a beautiful box, but I only have the cart at the moment.

I enjoy strategy games. Back when I was a teenager I spent many hours on the PC with games such as Command & Conquer: Red Alert and Heroes of Might and Magic IV. There is an appeal to me in being able to build something good that outsmarts the opponent, without ever feeling like I have to do work myself. The action does itself, and I am the military leader who builds smart strategies. A nice feeling when you plan a battle so that you know in the end your own guys will be able to just barely beat out the enemy and win the scenario.

Also, the computer can never cheat in strategy games. You can see what he has and you both have the same resources at your disposal. He has to follow the same rules as you. And, you can save and load at any time. So you can't blame your loss on a mistake or bad luck.

Jyutei Senki was only released in Japan. It was developed by Tam-Tam and produced by Enix and I would call it a light weight strategy game. I was happily surprised that it required no Japanese knowledge at all. Most Japanese strategy games I've tested so far seem to want to add complexity such as byuing and selling, reparing, and an abundance of options.

I'll show you someone elses video, because it goes faster than my gameplay. Here is a gameplay I enjoyed with someone playing the fan-translated version , and you see the intro and such. Normally I don't like to link to other's videos because I found that people often remove them!

Jyutei Senki is simplistic. Take turn to move your units, and if they are close to an enemy unit, they can attack, and the enemy can retiliate. Each unit has a strength and attack range, and all that other stuff we expect from strategy games.

One little extra in this game are the repair spots. Put a unit on it, and the next move it will be fully healed. This is a tremendous advantage if used smart. You can restore your strongest unit from almost dead to completely restored in just one move. You can even place a unit on the repair spot and wait for enemies to attack (and give them retaliate damage), only to have yourself healed the next round.

Another thing that one might not be used to is that from each scenario, your units will get taken to the next scenario. But the ones that died won't come back. With each kill, a unit gets upgraded up to a max of 10 when it becomes "ace" and will get an extra power upgrade. You don't want them dead at that stage! So save often to avoid it... And try to keep your units alive.

The computer isn't particularly smart and often attacks you on repair spots. It also fondly attacks your most useless units first instead of finishing off your strongest units, puts its weakest units in front of its stronger units so they can't pass, and so on. Computer stupidity is one of your main advantages.

Well, as it so happens, I started from a save game on level 7 without knowing. It took me a little while to understand how to play, and unfortunately I didn't understand this "don't die" thing too well at first. Your leader, a big bird called Ark, is stupidly weak until he gets 10 kills, but then he becomes the best unit of the game! So upgrade him quickly, and don't have him killed. He will, unlike other units, return in each new scenario, but at any level below 10 he is a useless crap that just dies as soon as battle starts. If he dies he will restart at level 0 again.

I played through the first couple of stages at about 40-60 minutes each. How many are there?? After each scenario it just says "to be continued". At around stage 12 it started getting more difficult, and I realized I should have upgraded other units earlier.

The reason why the later scenarios took much long were:
Well, like a mad military commander I kept playing a couple of hours each night. Finally, Wednesday night, I beat the final scenario and the game. The ending was satisfactory. After the scenario mode there are expert scenarios you can play, if you want even more challenge.

I don't think this game has anything that can't be found in some app game but I am happy to have beaten this classic 1993 game, in case I ever make a list of games beaten. Starting from level 7 without knowing, it took a total of 25-30 hours, I think. It could have gone in at least half the time if I had known how to play from the beginning.

Here are some other reviews: