I received a Pokemon GBL from Japan yesterday, so I took a picture of all. 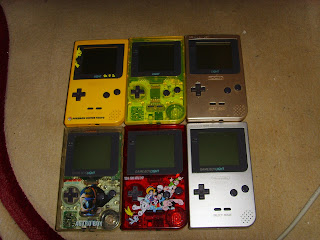 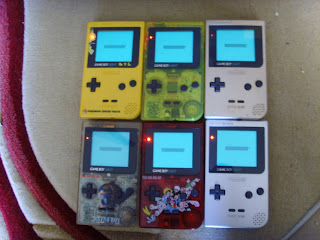 I still don't have the clear transparent one.

The only numbered limited of these is the Pokemon. Mine has the serial number PK02234. The others have normal serial numbers ("LXXXXXX") and so it is unknown how many were sold.
The two Tezuka Osamu game boys were sold for a limited time after the death of Tezuka Osamu. The box for the red one says "Limited Shop 12jul -27 sep, 1998".

The yellow skeleton may be the second rarest. It was only sold at Toys r Us, but it probably didn't sell much., and people didn't take care of it. I don't think I've ever seen it being sold with its box.

The Pokemon game boy is probably third rarest. But you are more likely to find it in good condition than the Toys R Us version because I assume people bought it as a collectors item. That's also why it can be found for sale more often, you can usually always find one on eBay (for a high price). It may be more expensive than the Toys R Us version, because Pokemon items are collectibles over the world. The Tezuka Osamu game boys are also rare but they aren't collectibles in the same way. They do look real fine, however.

I don't care about collectors value or boxes and such, I just collect because they look good. So at least I have a few nice looking stuff in my collection.
Upplagd av FredJ kl. 17:58